This is absolutely one of my favorite soups! I love it! It’s kind of like Chicken Tortilla Soup but better due to the addition of the purslane and the tomatillos! 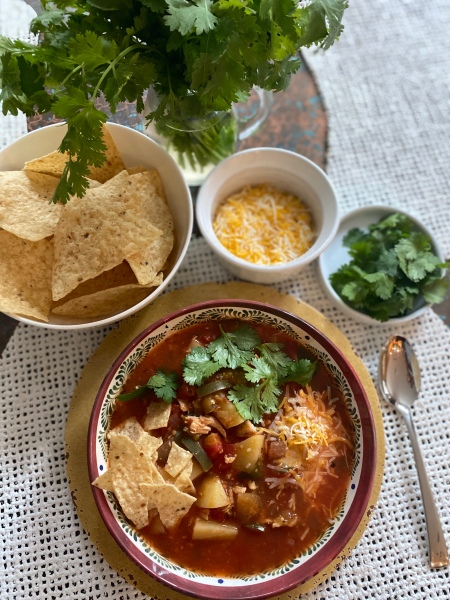 Purslane, if you’re not familiar with it, is the top known plant source of omega 3 fatty acids.! It’s a low growing, fleshy-leafed plant with a flavor that is mildly acidic and vaguely lemony. Purslane is also among the most common of weeds. If if you have a garden there is a good chance you have purslane growing as a weed. In much of the world however, this is a cultivated and much loved vegetable. In this country, if you don’t have it available to you as a weed, I understand it is sometimes sold in Mexican markets under the name verdolaga. There is also a cultivated variety which can be grown from seed, though I have not yet tried that method.

Several years ago, I discovered this super green in my garden and have been enjoying it ever since. Last year after moving across the county, I was very thankful when I found some in my elderly friends garden that I was tending. I harvested all that I could. It tends to die out when it gets really warm so if I see it, I grab it! I leave some of the plant in hopes that I can go back for a second harvest. I wash it and separated the leaves and then chopped the tender stems and freeze it. Then I can used it all winter in my soups!! A couple of weeks ago I spotted some in my garden. Did I get excited! I also realized that I had some extra jalapenos and tomatillos that I needed to use from my last trip to the grocery store which was a couple of weeks ago due to the stay at home. Realizing that it’s been quite warm, the decision to make and serve hot soup on a warm June day might be in question. But the tartness of the tomatillos along with the slightly lemony flavor of the purslane actually makes this a refreshing soup for a hot day.

2.  While cooking the above ingredients, cook the chicken breast and after cooling shred/pull with a fork.  Set aside.

4. Add the chicken and purslane. Simmer until tender. Remove the bay leaves and thyme sprigs. Serve garnished with cilantro.

One thought on “Chicken Tomatillo Soup with Purslane!”